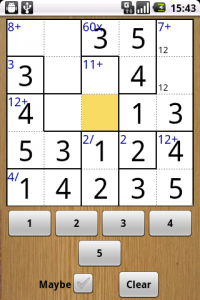 I’ll start by saying that I hate Sudoku, it always struck me as very tedious, and I’ve never heard of KenKen, the variation on which this game is apparently based. In case you’re clueless too, it’s like Sudoku but bits of the grid are boxed off and have to ‘solve’ the simple arithmetical puzzle for that box. If that doesn’t make sense, look at the screenshot – the three squares at the bottom right are boxed off and have to add up to twelve.

On a 4×4 grid, the smallest you can have, it’s pretty easy. You can choose any size from there up to 8×8, which is, let’s just say slightly tricky.

A nice little feature is that you can mark squares as being ‘maybe’ one of several numbers. Again, look at the screenshot – I decided the two squares in the top right were maybe 1 or 2, so marked that in to remember later. That might seem a bit unnecessary until you get to the larger grid sizes, then it’s probably essential.